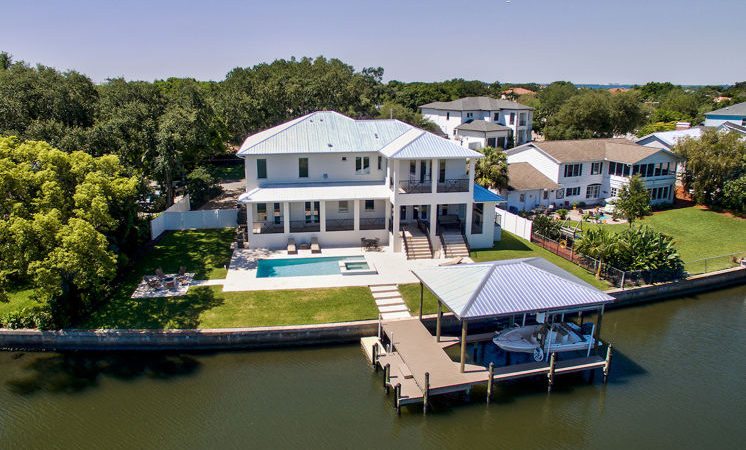 And even though interest rates have risen slightly since the presidential election, there is little sign the market is slowing down.

Pasco had the biggest jump in single-family home prices, up 17.4 percent from October a year ago to $179,900. Hillsborough, meanwhile, had its biggest gain in nine months, up nearly 16 percent to a median of $220,000.

With demand still high — and prices to match — near downtown St. Petersburg, Sartain said more buyers are looking farther north, in the 33702 and 33703 ZIP Code areas, where houses are more affordable.

At the other end of the spectrum, the top price paid in October for a bay area home — and the most paid for any single-family house in three years — was $6.875 million for a six-bedroom contemporary estate in Safety Harbor overlooking Old Tampa Bay.

Although the 10 gated acres were bought in the name of a trust, the borrowers on the $4 million mortgage loan are Pers and Svetlana Wickstrom. He is CEO of several drug and alcohol rehabilitation in programs in Michigan, including the 200-bed Best Drug Rehabilitation.

In Hillsborough, October’s priciest transaction was a 5,000-square foot waterfront house in Tampa’s Sunset Park area that sold for $2.857 million.

The Coldwell Banker listing agents, Mike Hughes and Jeff Shelton, were the selling agents on two other mega-deals in Tampa this year — the $6.625 million sale of former Tampa Bay Buccaneer Coach Greg Schiano’s home and the $4.5 million sale of a house purchased as a tear-down.

“The 2016 luxury market in South Tampa has been very active,” Hughes said. “With the international flights increasing and the wonderful things our mayor is doing — it’s multiple things that keep increasing values in South Tampa.”

Meanwhile, Hughes said, the demand for homes under $500,000 has been “extremely active,” especially from buyers who plan to raze and build new.