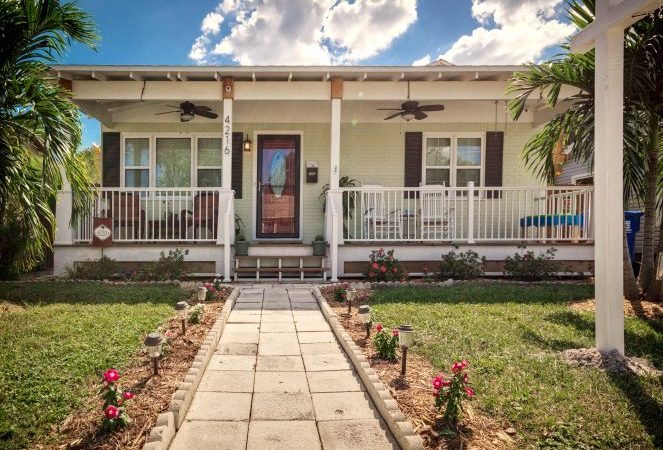 In 2012, during the bleakest year of the foreclosure crisis, a three-bedroom, two-bath house in St. Petersburg’s Russell Park sold in a distressed sale for $118,000.

Just before Halloween last year, the same house went back on the market. More than 65 people showed up at the first open house, and six put in offers, all higher than what the sellers were asking.

What a difference a few years can make.

In 2016, Tampa Bay’s residential real estate market enjoyed a banner year. Single-family home prices in the four–county area soared nearly 14 percent compared to 2015. That was the biggest year-over-year gain in at least six years and the largest increase of any major metro area in the state, according to newly released figures from Florida Realtors.

Despite concerns that buyers are paying too much in some overheated neighborhoods, this is shaping up as a solid year, too — though the heady days of 2016 likely won’t be repeated.

The long-running and somewhat baffling shortage of homes for sale could begin to ease, holding down the rate of price increases. At the same time, rising interest rates will limit what some buyers can afford and keep others out of the market. And while certain areas might do as well or better than they did in 2016 — Largo, Westchase, Tarpon Springs — others, like South Tampa, are approaching what appraisers call “crazy,” nearly unsustainable levels.

Nevertheless, Tampa Bay is still poised to be among the nation’s most robust housing markets in 2017. That’s the view of economist Brad Hunter, former Florida expert for the market intelligence firm Metrostudy, now chief economist for the online marketplace HomeAdvisor.

“The bay area has been extremely strong during this economic recovery,” Hunter said. “We’ve had very strong job growth — around 3 percent — and household formation rates also are increasing. What’s also been supportive of the Tampa Bay market is higher prices in the Northeast and Midwest. People have been able to sell their homes up there and move down here.”

Bay area home prices will increase again this year, Hunter predicts, though at a slower rate than in 2016.

As in 2016, the biggest demand this year will be for what Realtor Rebecca Paone calls the “typical” home — three-bedroom, two-bath with a garage and a moderate price tag

Last year, Paone listed a typical house in Largo, which has become a favorite of young families because of its affordable prices and relatively easy access to the Pinellas beaches. Updated, well-maintained and nicely landscaped, the house hit the market at $199,999. The price was so alluring that Papone had nearly 20 showings in the first 48 hours and took in eight offers.

“There would have been more, but many of the potential buyers couldn’t go higher than the asking price based on their budget and gave up trying,” she said. Still the house sold for $214,999, $6,000 above the list price.

Trulia, a leading online home-search site, ranks Tampa Bay No. 10 among U.S. metro areas with the biggest mismatch between available listings and what buyers are looking for.

The tight inventory isn’t frustrating for just buyers and Realtors.

Fewer homes for sale mean fewer homes get sold — while Tampa Bay prices rose almost 15 percent last year, the number of sales rose less than 5 percent. That’s a big problem for appraisers, who rely on recent sales of comparable properties to determine whether that house you just have to have is really worth what the seller is asking.

“Because of the lack of listings, people are listing for more than what is out there (on the market) to support the price,” said Fran Oreto, chairperson of the Florida Real Estate Appraisal Board. “As an example, somebody might list a house for $200,000 and somebody might be willing to purchase it for $200,000 because there is nothing else available” to compare it with.

The tight inventory can lead to inflated prices, Oreto said, and also make it harder to get a government-insured loan in neighborhoods with few or no recent sales. Fannie Mae, the mortgage giant, wants appraisers to use comparable sales within 90 days.

“What happens if the most recent sale was in June of last year?” Oreto says. “The biggest problem I come across is really a lack of listings, which eventually will drive the market.”

Hunter, of HomeAdvisor, thinks more people will start listing their homes if the economy continues to recover and home values increase.

“Fewer people are underwater on their mortgage and of course when you’re underwater you can’t very well sell because you owe more than the house is worth,” he said. “That’s a big part of the reason we’ve seen inventories quite low over the last six, seven, eight years. Now, more people can buy with ease because they can sell more easily and pay more for the home they buy.”