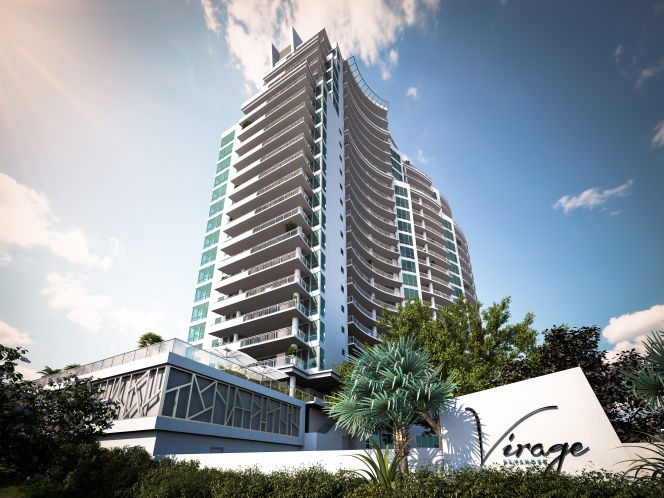 It may not be a hard sell. Months before the first shovel of dirt is turned, more than half of the 71 units are reserved including one of its $5 million penthouses. If that sale goes through, it would be the top price paid for a Tampa condo in a decade.

“We started last summer to meet with potential buyers and there was a lot of excitement about something new,” said Dave Traynor of Smith &Associates, which is marketing the Virage.

Exactly a year ago today, Sarasota-based Ascentia Development Group purchased the bayfront site of the beloved Colonnade restaurant and two nearby parcels for $6 million. In the Colonnade’s place now stands a sales center designed to resemble an actual unit, including kitchen with glass tile backsplash, open floor plan, large patio and 10-foot-high, floor-to-ceiling windows looking out over Hillsborough Bay and downtown Tampa.

“We’re trying to replicate as many features as we can for our buyers’ benefit,” aid Steve Barber, Ascentia’s vice president. To give them a better idea of what the finished product will look like, the sales center also offers a virtual fly-by tour and has a stunningly exact architectural model, complete with tiny trees, people and cars.

Construction of the Virage, at 3401 Bayshore Blvd., is due to start by fall and take 22 months. It and the 15-story Aquatica already rising a half mile away on Bayshore are the first new condo towers to be built in Tampa in a decade.

The Virage’s units, which will incorporate high-tech and design features not available in older Bayshore condos, will range from 2,400 to 6,900 square feet. Prices run from $1 million to $5 million for the two penthouses, each of which will cover an entire floor.

Although one of the penthouses has been reserved at that price, the test will come at the time of contract and closing. No condo in Tampa has sold for more than $2.655 million in the last 10 years, Multiple Listing Service records show. By comparison, a Beach Drive condo in St. Petersburg went for nearly $7 million last year, and several others have sold for more than $3 million.

“It is ambitious,” Traynor said of the Virage’s pricing,” but the potential buyers we’ve talked to were more concerned about quality and an unsurpassed location, less about price.”

In Aquatica, where prices range from $978,000 to $2.15 million, most of the 32 units have been sold although that project won’t be finished until next March. Broker Toni Everett, whose firm markets Aquatica, said she wouldn’t be surprised if the Virage penthouses actually sold for $5 million.

“There’s a pent-up demand for penthouses,” she said.

Traynor said most of the buyers who have reserved Virage units are from South Tampa, including some who live in other condos. Of the reservations so far, “every bit was unsolicited, we didn’t even have a sales gallery,” he said. “That exceeded all expectations.”

Virage’s name comes from the French word for “curve,” and curve it will — around a century-old oak.

“It was obvious to us that the community was very enamored of that tree,” said Barber, noting that it was a familiar sight to generations of Tampa residents who dined at the Colonnade. “People got married under the tree, had a first kiss under the tree, so we decided to design the building around the tree.”