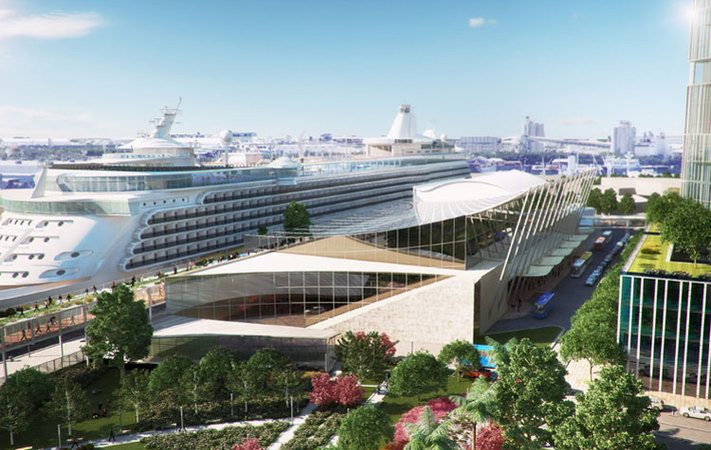 The land that Port Tampa Bay owns near downtown is now 45 acres of sun-beaten asphalt.

But what could it be 15 years from now?

How about $1.7 billion worth of apartments, hotels, offices and stores, with a bigger cruise ship terminal, one of Tampa’s largest urban waterfront parks, a marina and two 75-story high-rises?

If the port can pull off the project it unveiled Thursday, it would have a profound impact on downtown Tampa, raising a second billion-dollar development within sight of one being planned by Tampa Bay Lightning owner Jeff Vinik. 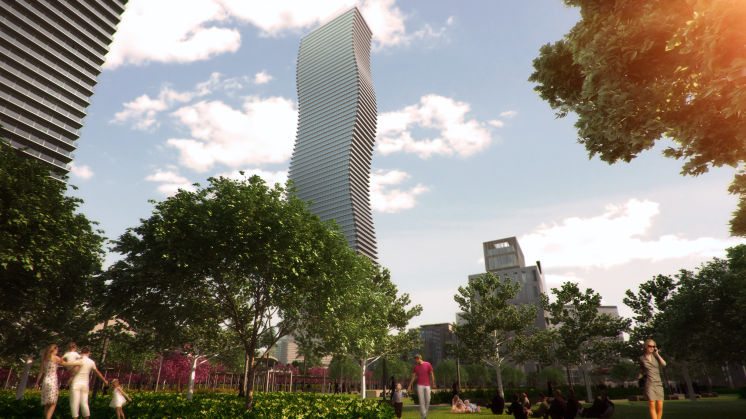 It’s also a huge challenge, the kind that often implodes.

“Waterfront projects — and we’ve done this all over the world — are very difficult projects to execute,” said Luis Ajamil, president of the Miami-based planning, architecture and engineering firm of Bermello Ajamil & Partners, which drafted the plan. “In fact, they are fraught with a lot of failures.”

There are three major pitfalls, Ajamil said: One, ports don’t see a need to evolve. Or they don’t come up with sound, market-driven business plans. But the biggest one is that waterfronts tend to be “full of conflicts.” So when change is discussed, people with long histories of living or working there often choose up sides and fight.

So far, he said, he hasn’t found that here, and he has met with about 100 nearby property owners, local officials, residents and others. 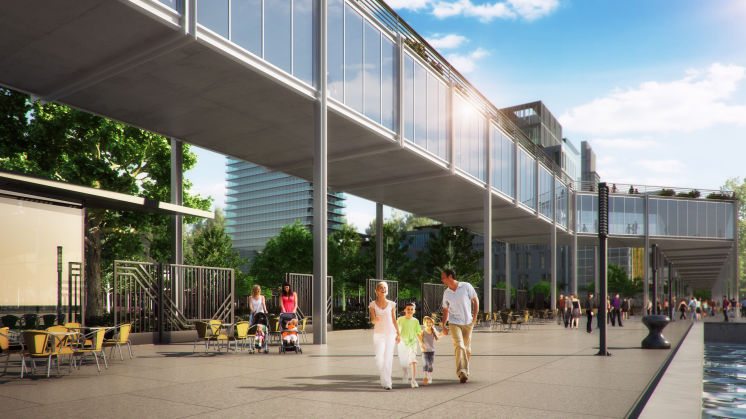 Still, the port’s project would be massive, with more than 9 million square feet of construction. That’s more space than in Tampa’s 18 downtown office towers — combined.

Could downtown’s real estate market support that much land, the largest single block of property in the urban core, coming onto the market?

“It’s a 15-year build-out,” Mayor Bob Buckhorn said. “As long as the market continues to mature and prosper, I think there will be a demand for living here. Waterfront living is at a premium. . . . I think over time, this will all fill in. I’d rather set the plan now, so people understand what the blueprint is.” 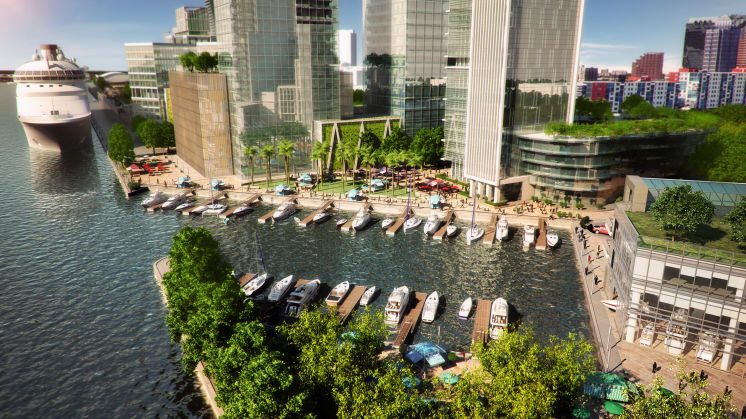 The project would unfold along a strip north of the Florida Aquarium between Channelside Drive and the Ybor Channel.

Port officials think their plans would complement Vinik’s. His land development company, Strategic Property Partners, said it does not see the port’s project as competition. Rather, it applauded the port’s “efforts to help build a more friendly downtown waterfront for our community and its visitors.”

“As we continue developing our master plan, we look forward to continued discussions with port leadership to see where the projects might meld together into the best possible solution for Tampa’s downtown waterfront,” Strategic Property Partners spokesman Bill Wickett said in an email to the Tampa Bay Times.

The project would unfold in phases, officials said, from south to north. 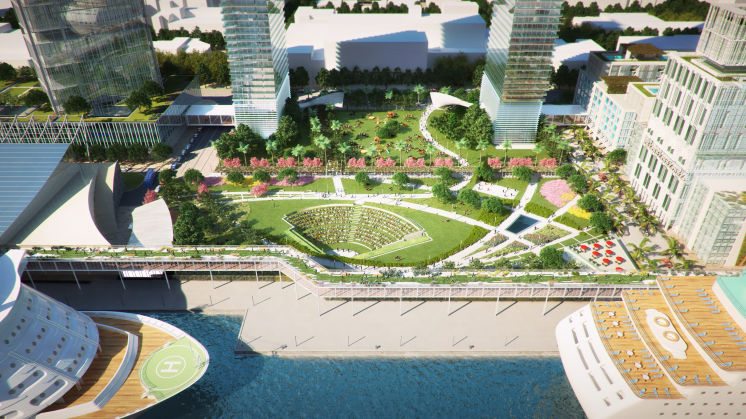 It would need an estimated $200 million in public infrastructure such as roads, sewer, water and drainage improvements, plus that big park. Officials expect the money for those projects would come from two places: the port itself and community redevelopment revenues generated inside the Channel District.

Currently, the Channel District CRA generates about $3.3 million a year in community redevelopment funds. But if developed along the lines the port is talking about, officials estimate it could generate a total of $300 million in redevelopment revenue over the next several decades.

The rest of the project’s development costs — an estimated $1.5 billion — would be covered by private investors.

“This is a project that will be picked up throughout the world,” Ajamil said. 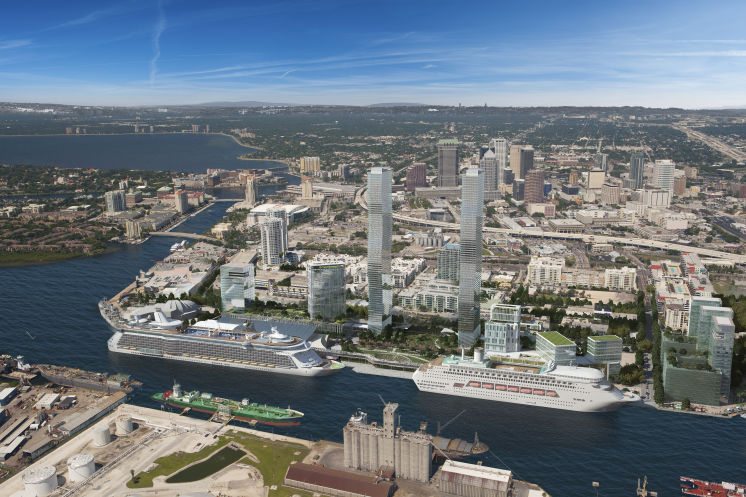 • Continued cruise ship operations, though the plan anticipates the industry’s growth in Tampa will be limited because big, new cruise ships can’t fit under the Sunshine Skyway bridge. Still, there will be cruise ships, sometimes a couple at a time. So the plan calls for tearing down Cruise Terminal 6 to make room for the new development being envisioned. Meanwhile, it would expand Cruise Terminal 3 to allow two ships at a time to berth there.

• Mixed-use development on what is now the Florida Aquarium’s parking lots. The city, which owns the aquarium and the lots, would swap the lots for parking to be built to serve the expanded cruise ship terminal.

• A large waterfront park flanked by two towers up to 75 stories high. An elevated walkway would allow people to walk north and south along the length of the project with views of the water.

• A marina and retail plaza on what used to be the port’s Banana Docks on the northern end of the property, across from E Twiggs Street.

• An improved Channelside Drive, with a sidewalk on the west curb wide enough for outdoor cafes, on-street parking to narrow the road, a corridor for trolleys or other transit and a more pedestrian-friendly streetscape. E Kennedy Boulevard and E Whiting Street would be extended east into the project. Kennedy would go all the way to the water.

The 45 acres the port is looking to develop is a fraction of the 5,000 acres it owns along Tampa Bay. Anderson said revenues from developing that land could support the port’s maritime operations and mission.

Local officials said they expect to spend the next several months converting the vision into a master plan. Then they would need to find development partners, negotiate deals and get regulatory approvals. Depending on how fast the port’s board wants to move, officials said the first construction could start in late 2016 or early 2017.

“Let’s figure out how to make this work,” Buckhorn said. “This is a big day for the port, but it’s an even bigger day for the community.”