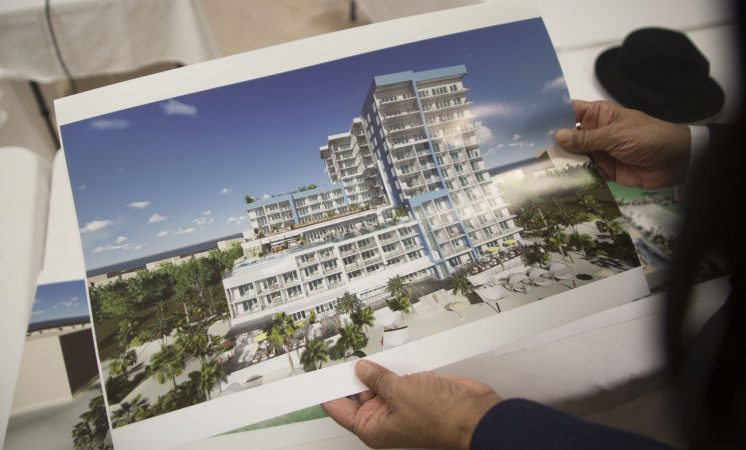 After four years of planning, one of the world’s top luxury hotel brands — JW Marriott — finally could be coming to Clearwater Beach.

Sales are to begin this week for 36 fully furnished JW Marriott Residences, the first of their kind in the United States. They would occupy four upper floors of what also would be a 166-room JW Marriott hotel, one of only about 75 worldwide.

It would be Tampa Bay’s first five-star hotel.

“This is a big deal,” hotelier Uday Lele said Monday of the $120-million project that would replace his DreamView Resort at 691 S. Gulfview Blvd. “I feel that to have this name brand come to Clearwater Beach will benefit all of Tampa Bay in a very big way.”

Lele’s Enchantment LLC is announcing its affiliation with Marriott at a time of unprecedented hotel activity in the Tampa Bay area. Two large new resorts — Opal Sands and the Wyndham — recently opened on Clearwater Beach, and at least 27 other bay area hotels, including several upscale ones, are planned or under construction with a total of 4,000 rooms.

Early last year, Lele said he was in talks with Marriott International about the project. At the time, though, the world’s largest hospitality company said only that while it considered Tampa Bay “a great destination for our JW Marriott Brand,” it had no specific plans for the area yet.

But on Monday, Marriott confirmed that it had given Lele the green light to launch sales of the condos on the Multiple Listing Service under the JW Marriott name. The one-, two- and three-bedroom units, ranging from about 850 to 1,350 square feet, will be priced from $550,000 to $1.3 million and could be occupied by the owners for a month at a time, Lele said. When rented out, the condos would serve as suites for the hotel and be managed by Marriott.

The 166 traditional hotel rooms would occupy the rest of the 15-story building, which would have an infinity pool, outdoor decks at various levels and a Spa by JW. Plans also call for two restaurants, one similar to the market- style Burlock Coast Seafare & Spirits in Fort Lauderdale, the other serving Peruvian-Japanese fusion cuisine.

The rooms, residences and restaurants all would have views of the 300-foot private beach, which faces Sand Key across an inlet and also looks toward the Gulf of Mexico.

Construction could start this fall after the existing hotel is razed and would take about two years, Lele said. He said he has obtained a construction loan.

An expert on the hospitality industry said Lele’s affiliation with Marriott would help the viability of the project, which would be Tampa Bay’s first five-star hotel under a brand name.

“The location is a very good one,” Lou Plasencia, CEO of Tampa’s The Plasencia Group, said Monday. “Anything in that area I think will do well given the amount of visitor traffic that Clearwater Beach has seen of late. Visit St. Pete/Clearwater would welcome any new hotel in that area, especially one of this caliber.”

JW Marriott ranked No. 3 in the luxury segment in J.D. Powers & Associates 2016 North American Guest Satisfaction Study, behind Ritz-Carlton (another Marriott brand) and Four Seasons. The JW chain has two hotels in Miami, one in Orlando and the recently opened JW Marriott Marco Island Beach Resort in Southwest Florida.

Lele said he realized he wanted to affiliate with Marriott after visiting several of its hotels and conversing with a waitress who had been with the company 25 years. She told him Marriott had arranged for her to stay with the company when she had to move to another state to take care of an ailing relative.

“Many other brands approached me because of the uniqueness of the site,” Lele said. “What attracted me to Marriott was its family values and the honor of having (the founder’s) name on the hotel.”