World War I had just begun, Charlie Chaplin was charming moviegoers as The Little Tramp and a letter could be mailed for 2 cents when a new elementary school opened Sept. 21, 1914, in the northeast area of a fast-growing St. Petersburg.

Over the decades North Ward School would become a beloved part of the neighborhood, supported by teas and bake sales, until time began to dull its looks and render it obsolete. One June day in 2008, someone wiped clean the blackboards and turned out the lights for what many thought would be the last time.

Now, North Ward is coming back to life. 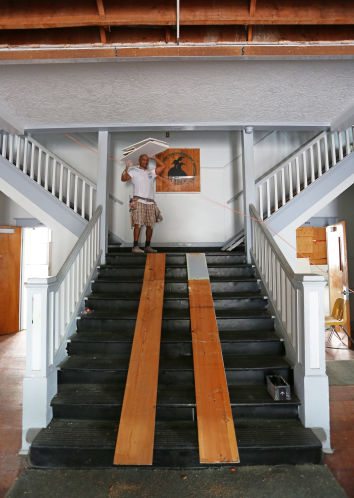 Real estate investor Jonathan Daou bought the property at 327 11th Ave. N from the Pinellas County school district two years ago for $1.7 million. He is spending hundreds of thousands of dollars more to refurbish the Mission-style building and again make it an important part of its neighborhood, albeit not in a way that School Board members a century ago ever could have envisioned.

A new addition facing Fourth Street will house a restaurant with an outdoor patio, perhaps a “California/Mexican-themed, fast-casual place,” as Daou puts it. Former classrooms will become a boutique, a fitness studio, a facility to train yoga instructors and a shop selling “organic” children’s clothing and products.

“I’m trying to curate an excellent mix of uses,” Daou said on a recent tour. “I was the only one that wanted to preserve this.”