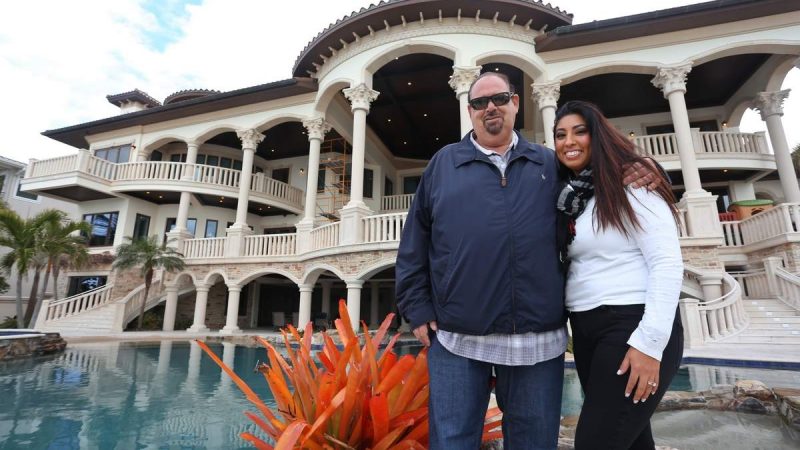 Real estate investor Ben Mallah bought a gulf-front mansion Thursday for $16.5 million, by far the most ever paid for a residential property in the Tampa Bay area.

The seller was former Philadelphia Phillies slugger Ryan Howard, who built the house four years ago on 200 feet of private beach that he bought for $3.5 million.

Mallah, known for his flamboyant personality and colorful language, said the house was an anniversary present for his wife, Karla.

“This is her gift for 15 years of putting up with me,” said Mallah, who drove to the final walk-through in a white Rolls Royce with a red convertible top. “She getting two grand prizes, me and the house.”

Mallah said he had looked at all available homes along the beach before settling on one that sits on a 2 1/2 acre lot and resembles a castle. With balconies and patios, the square footage reaches nearly 40,000 square foot. Among the amenities are a two-story paneled library, a bowling alley, a wine cellar large enough to host a small cocktail party and a trophy room complete with glass cases (currently empty.)

The pool is enormous and meanders lazy-river style through the entire property. The garage houses six vehicles.

Mallah’s real estate holdings include several hotels in the Tampay Bay area and other parts of Florida. A self-made millionaire who never finished high school, he recently sold a senior living tower in Clearwater for $5.5 million more than he paid for it two years ago.

Ryan, the home’s seller, spent his entire Major League Baseball career with the Phillies. A first baseman, he won the National League’s Rookie of the Year award in 2005 and its Most Valuable Player award in 2006. He announced his retirement last year, and is currently a partner in a Philadelphia venture capital firm. He also has co-authored several chidlren’s books.

The listing agents for the house were Jackie Diaz and Karen Hegemeir of Premier Sotheby’s International Realty. The home was was sold in a private placement, meaning it never appeared on the Multiple Listing Service. Diaz said she marketed it only to an exclusive group of wealthy buyers and agents who specialize in luxury properties.

The selling agent was Rafal Wazio of Coldwell Banker Residential Real Estate. “Today he made his biggest sale — now his kids will have hamburger in the Hamburger Helper,” Mallah joked.

The highest amount previously paid for a Tampa Bay home was $11.18 million two years ago for the Century Oaks estate on Clearwater Harbor. Even Sarasota County, long known as a high-end market, has not had a sale close to $16.5 million in at least 10 years.

Mallah, 53, said he plans to put his two current homes — one in Redington Beach, the other in Clearwater — on the market. Asked if the Belleair Shore house would be his forever home, he said:

“In real estate, you never know. It looks like it might be because I ain’t getting any younger. My wife could bury me in the planter or put me out to sea.”