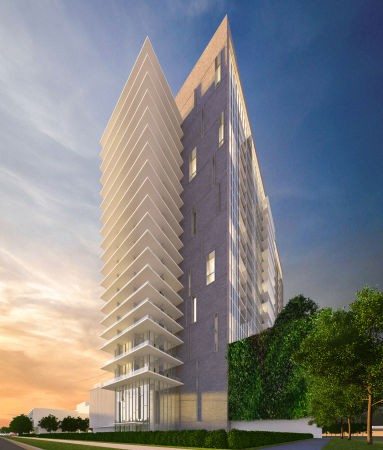 A synagogue, a garden club and a venerable breakfast spot could be getting a striking new neighbor, a 22-story apartment tower.

“Its really a different product type from what’s coming on the market in that this is going to be bigger, more luxurious units geared to empty nesters,” said attorney Truett Gardner. “Architecturally, it’s a really bold and exciting building.”

Last fall, a company affiliated with Skyway Capital, a private equity investment firm, paid $11.25 million for the site. It currently contains two mid-rise office buildings and the popular Pach’s Place restaurant, all of which would remain, Gardner said.

The site also has been approved for an additional 100,000 square feet of office space on what is now a parking lot. Gardner said the developer is seeking city permission to use that space for the apartment tower instead. A hearing is scheduled for June.

Whatever goes up on the site would generate more traffic, which “obviously is a big concern of everybody,” Gardner said. But, he added, a residential project would produce “substantially less” traffic than offices.